That great Austrian novelist, playwright – and general trouble-maker – Thomas Bernhard would have been 90 this February (2021). To me, it feels as if it were only yesterday that we were about to begin marking some previous Bernhard anniversaries at Rutland Gate. How did I, in real life a busy music producer at BBC Radio 3, come to be involved in such an enterprise in the first place?

Well, some time around the turn of the century, the ORF had presented its listeners with an Englische Woche broadcast from the BBC's London studios; and as a German speaker, I was recruited to be one of their chaperones. One thing led to another, and with their polymath presenter Peter Kislinger, I eventually produced - for our own Radio 3 - a programme about Karl Kraus. And then when I asked Peter "Who or what would you like to do next?" he replied "What about Thomas Bernhard?" Even now I blush at the ignorance of my response: "Thomas who?" The subsequent learning curve would prove to be quite steep ....

But we made the programme, bravely calling it Bernhard's Blues. Round about then, I seem to recall in a moment of inspiration - or was it blind panic? - ringing up Rutland Gate and asking if they had any of his books I could borrow .... and the rest is history (see the picture) - or almost. Mightily encouraged by everybody there, particularly of course by Andrea Rauter, and with the enthusiastic (I think!) support of Directors Zimmermann and Mikl, I first put together an evening of bilingual readings for Bernhard's 75 birthday, in which Johana Lonsky and Gerald Davidson coped heroically with some rather arbitrarily-chosen examples of Thomas Bernhard's dangerously flamboyant prose.

Five years later – how the years flew by! – we were generously allowed a whole weekend, with talks, readings, a film, a rehearsed reading of Der Präsident, and a round table discussion to end with. And even some well-earned Grüner Veltliner after that.

Then there was the coup de grâce in 2012, in the form of a semi-staged adaptation (by me) of Bernhard's Der Untergeher (The Loser), complete with a pianist (Edmund Lee) in the non-speaking but musically vital role of Glenn Gould, playing Gould – and Bernhard's – beloved Goldberg Variations, by J.S. Bach.

Since then, silence. Times change, of course, and people move on – I for one now live in distant Hampshire. But I am proud of what we did for Thomas Bernhard, back then; my admiration for his work has not diminished one iota, in fact it has if anything only increased. And I remain profoundly grateful to all my Austrian friends, at Rutland Gate and elsewhere, for allowing me to give free rein to my enthusiasm. Danke schön, and Happy Anniversary! 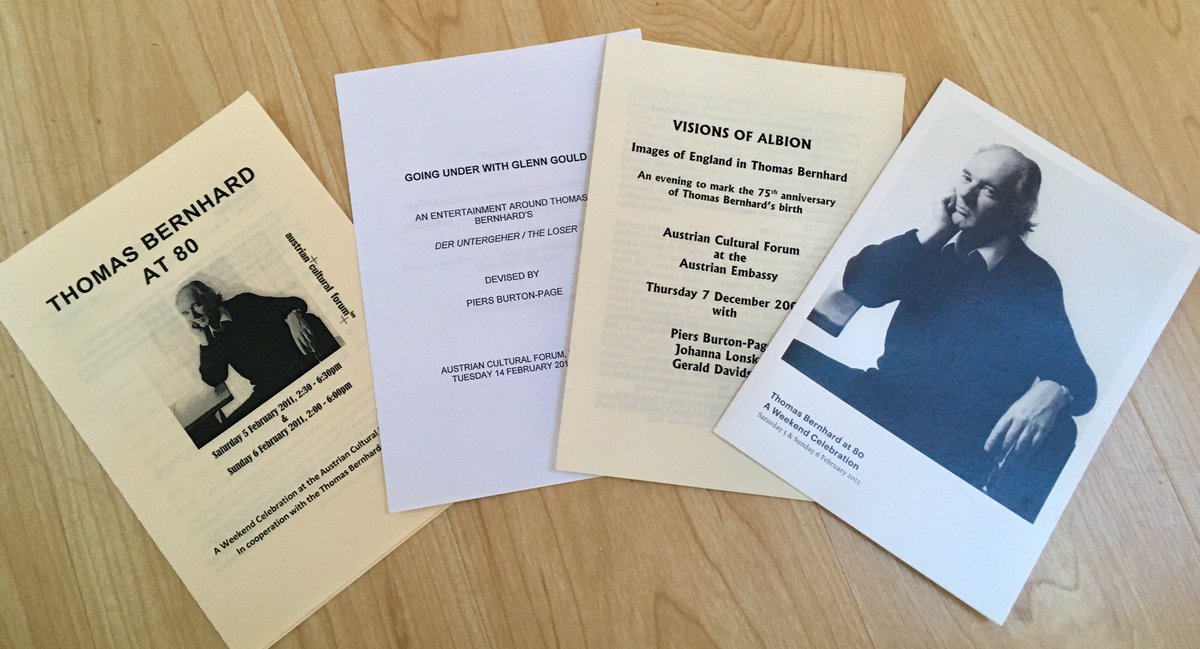